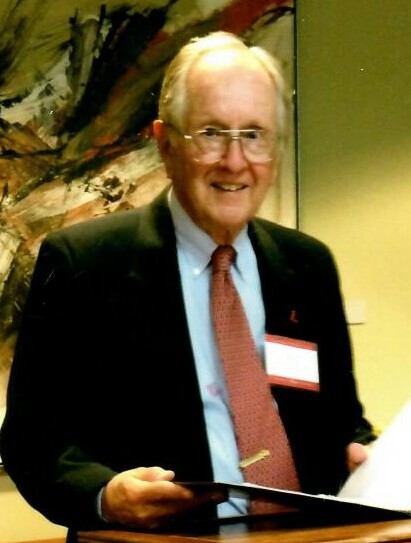 Obituary of Paul B. Mott

Please share a memory of Paul to include in a keepsake book for family and friends.
View Tribute Book
Paul B. Mott, Jr., died at home on Monday, October 10, 2022, at the age of 92. Gregarious by nature, he was also a man of principle, committed to country and community. He relished new challenges, marveled at unexpected opportunities, forged enduring friendships with people in all walks of life, and basked in the warmth of family ties. Son of the late Paul Bailey Mott and Margaret (Rhoades) Mott, he was born in Mercer Hospital in Trenton and lived with his parents in Pennington until moving to Lawrenceville in 1939. Paul graduated from the Lawrenceville School in 1947 and Yale University in 1951. After a tour of duty as a U.S. Marine Corps officer in the Korean theater, he studied political science at the University of Vienna in Austria. Paul served with the Central Intelligence Agency in the divided city of West Berlin from 1957 to 1962 (during the era of the “Berlin crisis” and erection of the Berlin Wall) before joining the Department of State where he was assigned to the U.S. Embassy in Bonn, Germany (then the provisional capital of West Germany), and twice to the U.S. Mission to the United Nations in New York City. He was a member of the U.S. Delegation to the eighteenth, twenty-second, and twenty-third sessions of the UN General Assembly. After leaving government service, Paul joined a team organized by the American Institute of Architects asked to identify inner city sites across the country in need of architectural investment. He subsequently became interim Headmaster of the Collegiate School in New York City before turning to the field of corporate and family foundations. He served as executive director, respectively, of the Altman Foundation; the William S. Beinecke corporate and family foundations (including the S&H Foundation and the Prospect Hill Foundation); the Tomlinson Family Foundation; and the F.M. Kirby Foundation, remaining at the latter for twenty-three years. Paul postponed retirement to serve for two years as Director of Alumni Relations at the Lawrenceville School, retiring in 2001. He was president of his class for its 45th and 50th reunions, president of the Alumni Association, and recipient of the school’s Distinguished Alumnus Award in 1999. He subsequently was elected a school trustee and trustee emeritus. His two sons as well as his two grandsons also graduated from the Lawrenceville School. In his youth Paul loved baseball and soccer. His baseball “career” started at the Lawrenceville School and after graduation he played in local Trenton area summer leagues for the American Legion Post 414, St. Ann’s Boys Club, VFW 3022, Atwoods, and Scully’s Pirates. He played soccer for the Lawrenceville School and Yale University and for amateur leagues in Connecticut and Vienna. He subsequently became a soccer referee, working at all levels from youth to professional. As head of the New Jersey youth soccer referee program, he, with colleagues, founded the referee training program which subsequently trained several thousand referees to meet the demands of growing youth and adult leagues in New Jersey. He achieved national recognition as a referee, instructor, administrator, and assessor. He was appointed to the United States Soccer Federation National Referee Committee, and was later elected to the New Jersey State, the New Jersey Youth, and Mercer County soccer halls of fame. His community activities included memberships on boards of the Community Food Bank of New Jersey and the Pinelands Preservation Alliance, among others. He volunteered with the Red Cross Disaster Relief and with Partnership in Philanthropy as a consultant to various nonprofit organizations. More recently he served as a member of the Lawrence/Ewing Juvenile Conference Committee. Father of the late Elisabeth M. DesCombes, he is survived by his loving wife of 65 years, Susan (Adams) Mott; three devoted children and their families: Paul B. Mott III, wife Quenby (Jackson) and their daughter Sydney; Stephanie (Mott) Simmons, husband Scott and their daughter Sophie; Andrew T. Mott, wife Amanda (Grashof) and their two sons Jefferson and Tait; and son-in-law Jeffery W. DesCombes, Elisabeth’s husband and father of their two daughters: Margaret and Kathryn DesCombes. Paul is also survived by his brother Peter Rhoades Mott, with whom he shared many fishing and bird-watching adventures, as well as by Peter’s three children: Polly, Peter, and Archie Mott. In accordance with his wishes, Paul’s funeral service will be private, but the family greatly appreciates the outpouring of love and support generously extended by friends, neighbors, and colleagues. In lieu of flowers, donations may be made to The Lawrenceville School, 2500 Main Street, Lawrenceville, NJ 08648.

Look inside to read what others have shared
Family and friends are coming together online to create a special keepsake. Every memory left on the online obituary will be automatically included in this book.
View Tribute Book
Services for Paul Mott
There are no events scheduled. You can still show your support by planting a tree in memory of Paul Mott.
Plant a tree in memory of Paul

Share Your Memory of
Paul
Upload Your Memory View All Memories
Be the first to upload a memory!
Share A Memory
Plant a Tree