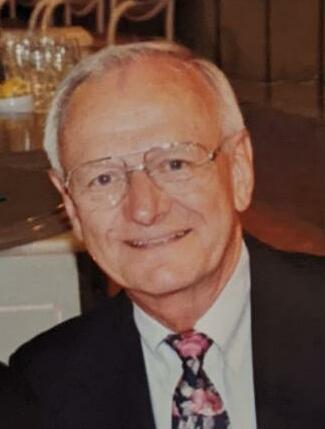 Please share a memory of Robert to include in a keepsake book for family and friends.
View Tribute Book
Robert (Bob) James Pluta, 93, of Lawrenceville, N.J., peacefully went home to our Lord on August 29, 2022. A devoted husband and father, Bob was a dedicated pharmacist who loved spending time with his family and friends. Born in Trenton, N.J., Bob graduated from Trenton High School in 1947 before studying pharmacy at the Philadelphia College of Pharmacy and Science. His studies were interrupted briefly to serve his country as a medic in the United States Army during the Korean War from 1950-52. He then returned to college and earned his B.S. in pharmacy in 1954. After graduation, he entered religious life and spent several years as a Holy Cross Brother in the 1950s and early 1960s. During the brotherhood, he was a science teacher at Holy Cross High School in Flushing, N.Y. After discerning that religious life was not his vocation, he left the Brothers and returned to Trenton to teach chemistry at St. Francis Hospital School of Nursing from 1965-66. He spent the rest of his professional career working as a pharmacist, first at the North Princeton Developmental Center and then as a retail pharmacist. Bob proudly worked well past the age of retirement. Bob loved his family. He met his loving wife, Maria, through the Catholic Alumni Club, and they married in 1968. They were committed to raising their four children in the Catholic faith and led Pre-Cana classes for many years. Bob had a great sense of humor and always had funny jokes for his kids. He also passed down his sweet tooth genes to his children and regularly brought them home treats from the pharmacy. If Bob wasn’t working in the pharmacy or spending time with his family, he probably was gardening, baking, or refinishing furniture. He maintained an impeccable yard, made the most delicious homemade breads and strawberry jam, and restored second-hand furniture into beautiful household pieces. He loved throwing St. Nicholas Day parties for his friends and their children. He also enjoyed dancing, especially the polka, and vacationing at Cape May Point with his family. Bob’s health took a turn for the worse about 15 years ago, but he lived without complaint surrounded and cared for by his devoted family with the assistance of his dedicated caregiver, Andrew, and many others along the way who helped with his care. Predeceased by his four siblings, Stephen, Harry, Donald, and Joyce, he is survived by his wife, Maria, and four children, Peg Hanna (Toby), Christine Pluta, Robert T. Pluta (Magdalena), and Jeanne Bracy (Aaron), as well as his grandchildren Liam and Luke Hanna; Gabriel, Julia, and Evelyn Bracy; his namesake, Robert Pluta, and Eric. Visitation for Robert will be held on Friday, September 9, 2022 from 5-8 p.m., and again on Saturday morning from 9:30-10:30am at St James Church, 115 E Delaware Ave, Pennington, NJ 08534. A Mass of Christian Burial will follow at 10:30AM. Burial will be held at Sts. Peter and Paul Cemetery, Hamilton, N.J. In lieu of flowers, donations can be made to: The Marianist Family Retreat Center at www.CapeMayMarianist.org or The Church of St. Ann at https://membership.faithdirect.net/givenow/NJ709 and click on St. Michael Building and Preservation Fund or Mt. Carmel Guild, Trenton www.MtCarmelGuild.org/donate
Friday
9
September

Share Your Memory of
Robert
Upload Your Memory View All Memories
Be the first to upload a memory!
Share A Memory
Send Flowers
Plant a Tree