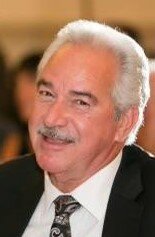 Please share a memory of Ralph to include in a keepsake book for family and friends.
View Tribute Book
Ralph C. Veltri, 74, of Lawrenceville, passed away peacefully on Monday, August 22, 2022 at home surrounded by his loving family. Born in Trenton, NJ, Ralph was a lifelong resident of Lawrenceville. Ralph is a retiree of PSE&G, where he was employed for 40 years and worked in thousands of homes across Mercer County. He graduated from Notre Dame High School in 1966 and Mercer County Community College in 1968. He was a parishioner at The Church of St. Ann and a member of its’ Knights of Columbus Counsel No. 7000. He proudly served his country with the National Guard during the Vietnam War. Ralph was an avid hunter and fisher. He enjoyed vacationing in the Islands, gardening, tending to his fruit trees in his backyard, reminiscing with his former PSE&G colleagues, and following his beloved New York Yankees. His greatest joy came from spending time with his family. Ralph was the son of the late Carmen and Carmela Veltri. He is survived by his daughter and son-in-law, Rose Marie and Joseph Andolina; his beloved partner of 25 years, Marianne DeNicola Castagna; Marianne’s children and their spouses, Morgan and Matt Hunter, Matthew and Rochelle Castagna, and Mallory and Scott Staats; his sister, Angela Veltri, and her partner Chris Garruba; his brother, Alfred, and wife Joan Veltri, and their children, John Veltri (Ellen), Dina Ferraro (Nick) and Mary Pepe (Joe); and his many relatives, cousins, and extended family. The light of his life were his grandchildren -- Michael, Mila, John, Mason, Hadley, Carmen, Talan, and Sedona. A Mass of Christian Burial will be celebrated on Monday, August 29, 2022 at 10:00AM at The Church of St. Ann, 1253 Lawrence Road, Lawrenceville, NJ 08648. Mass attendees are asked to arrive to the church no later than 9:45AM. Interment will follow at Lawrenceville Cemetery. Visitation for family and friends will be held on Sunday afternoon from 4-8PM at Poulson & Van Hise Funeral Directors, 650 Lawrence Road, Lawrenceville, NJ 08648.
Print
Sunday
28
August

Mass attendees are asked to arrive to the church no later than 9:45.

There will not be a visitation prior to the Mass on Monday morning.
Online Memory & Photo Sharing Event
Online Event
About this Event