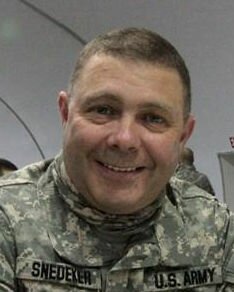 Please share a memory of David to include in a keepsake book for family and friends.
View Tribute Book
David S. Snedeker, 61, of Lake Harmony, Pa and formerly of Lawrenceville died peacefully at home on Sunday surrounded by his family. Born in Trenton, Dave was raised and lived in Lawrenceville most of his life before retiring to Lake Harmony last year. He was a graduate of Lawrenceville High School and received his bachelor’s degree in Business Administration from California Coast University and his associates in Computer Science form Mercer County Community College. Dave enlisted in the United States Army in 1979 and served for a total of 42 years in both the U.S. Army from 1979 to 2001 retiring with the rank of Captain and the Army National Guard from 2008 to 2022 retiring with the rank of Chief Warrant Officer (CW3). Dave served in numerous campaigns over those years in Germany, Desert Storm and Desert Shield, Operation Iraqi Freedom and KFOR NATO Peace Keeping Mission receiving numerous awards and citations including two bronze stars. In his civilian occupation David served as a Chief Information Officer and Director of Information and Administrative Services for the NJ Department of Military and Veterans Affairs. He had experience in management of both federal and state government fiscal, administrative and information technology organizations. He served as the primary technology advisor to the Adjutant General, Brigadier General Michael L. Cunniff for a cabinet level state department with 2500 employees. David was one of only 5 CIO’s at the time to serve on the Governors statewide Transformation Committee and served as a member of both the Governors statewide Interoperability Communications Commission and Homeland Security Technology Advisory Board. He retired from this position in 2019. Dave’s passions were skiing, collecting hats, buying military and Disney memorabilia on eBay, drinking Heineken with his friends at Nick’s Lake House, watching Godzilla movies with his grandson Benji, traveling and eating at the best restaurants, listening to bands at Split Rock, and talking with his comrades at the VFW. Son of the late Clifford W. and Alvena Jones Snedeker, husband of the late Regina Kaytus Snedeker he is survived by his wife Sandra Tagliaferri Snedeker, his daughters Jessica Peterson and her husband Michael and Alexis Marie Snedeker and her partner Rafael Alvarado, his grandson Benji Peterson, his brother Clifford Snedeker and his wife Arlene; his nieces Adrien Dickerson and her husband Adam and Mary Snedeker and her husband Dennis Ridgeway, his great-nephew Simon Dickerson, his step children Tricia and Wayne Hannon and many friends and colleagues. Dave was also predeceased by his beloved St. Bernard Lancelot and curmudgeonly cat Dusty, and survived by his two feline buddies, Tux and Onyx. Funeral services for David will be held on Monday August 1, 2022 at 10 AM at Poulson & Van Hise Funeral Directors, 650 Lawrence Road, Lawrenceville, NJ. The Most Rev. Msgr. Dennis Apoldite will officiate. Burial with military honors will follow in the Ewing Church Cemetery, Ewing, Visitation for family and friends will be held on Sunday from 2 to 6 PM at the funeral home. American Legion Post 414 will conduct services at 4 PM. Memorial contributions to honor Dave may be made to V.F.W. Post 3022, 736 Cherry Tree Lane, Lawrenceville, NJ 08648.
Sunday
31
July

Share Your Memory of
David
Upload Your Memory View All Memories
Be the first to upload a memory!
Share A Memory
Send Flowers
Plant a Tree