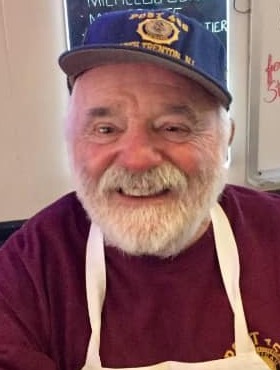 Please share a memory of Charles to include in a keepsake book for family and friends.
View Tribute Book
Charles J. “Jake” Tuccillo, 81, of Lawrenceville, passed away on Sunday, July 3, 2022 at home. Born in Trenton, NJ, Jake was a longtime resident of Lawrenceville. Jake proudly serviced his country with the US Army. He is a retiree of Mercer County, where he was a foreman for many years. Jake was a longtime member of VFW Post 3022, and American Legion Post 458. He was a huge sports fan, enjoyed coaching, umpiring baseball for many years in Hamilton Twp., and was a loyal friend of the Breakfast Club at Fred & Pete’s. He loved watching his son Chuck play hockey and socializing with everyone. Jake was a loving and devoted father, grandfather, great-grandfather, brother and friend who will be dearly missed by all who knew and loved him. Son of the late Charles and Margaret Tuccillo, husband of the late Ruth Lee Tuccillo; he is survived by his sister Maragret Hudson, his son, Charles (Crystal) Tuccillo Jr. and grandson Lucas; and Linda Zarish, Michael (Tammie) Jarvis; his grandchildren, Michael Gulotta, Michelle (Tony) DiStefano, Kevin Jarvis, Kim Jarvis, Sondra Jones, and Kenny Zarish, and great-grandchildren, Emily, Lacey, Ella, Adam, Miley, Dominik, Kennah, Annabel, and Greyson as well as several nieces, nephews and cousins. Funeral services will be held on Saturday, July 9, 2022 at 10:00AM at Poulson & Van Hise Funeral Directors, 650 Lawrence Road, Lawrenceville, NJ 08648. Entombment will be held at Greenwood Cemetery, Hamilton Twp. Visitation for Jake will be held on Friday evening from 6-8PM at the funeral home. In lieu of flowers, memorial donations can be made to American Legion Post 458, 1438 Brunswick Avenue, Trenton, NJ 08638.
Friday
8
July

Share Your Memory of
Charles
Upload Your Memory View All Memories
Be the first to upload a memory!
Share A Memory
Send Flowers
Plant a Tree