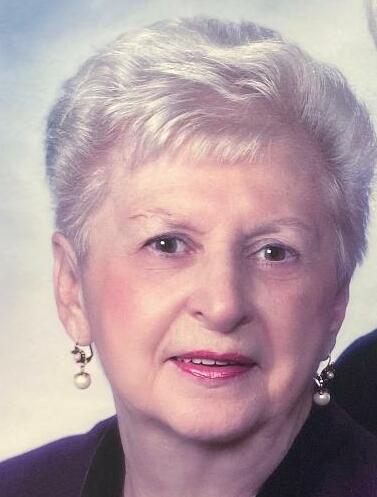 Please share a memory of Genevieve to include in a keepsake book for family and friends.
View Tribute Book
Genevieve “Jean” Sarafin, 85, of Lawrenceville, passed away peacefully at home on June 30, 2022, surrounded by the love of her family. Born in Trenton, NJ, she was a longtime resident of Allentown, NJ, before moving to Lawrenceville in 2007. Jean was employed as an Executive Secretary for the State of New Jersey, Department of Agriculture. This is where she met Joseph Sarafin, her beloved husband of 40 years. After marrying and moving to the "country" she was proud to call herself a homemaker, raising her children on the family farm. She was devoted to her faith, a longtime parishioner of St. Anthony of Padua in Hightstown, NJ before becoming a parishioner at The Church of St. Ann, Lawrenceville. She attended St. Hedwig School and graduated from Trenton High School. Some of her hobbies included knitting, reading, gardening, camping, and word search puzzles. She loved Broadway shows and listening to soundtracks from her favorite performers. She enjoyed traveling to Florida and Maine with her husband in their Airstream trailer later in life. The time she enjoyed most was spent with her family. Daughter of the late Joseph and Charlotte Dura, wife of the late Joseph A. Sarafin; she is survived by her daughters and sons-in-law Lynne and Michael Perrino, Noel and Douglas Gowton, Holly and Michael Gray and Jacqueline and Mark Safko; her stepdaughter Patricia Sarafin and stepson Jeffrey Sarafin; her beloved grandchildren Reed, Charlotte, Brandon, Sara, Michael, Cadence, Danielle and Dakota; her sister Evelyn Bobko, and many nieces and nephews. A Mass of Christian burial will be celebrated on Wednesday, July 6, 2022 at 11AM at The Church of St. Ann, 1253 Lawrence Road, Lawrenceville, NJ 08648. Interment will be held at St. Hedwig Cemetery, Ewing Township. The viewing for Jean will be Wednesday morning from 9-11AM in the daily chapel at the church. In lieu of flowers, memorial donations can be made to The Church of St. Ann, 1253 Lawrence Road, Lawrenceville, NJ 08648 or to HomeFront, 1880 Princeton Avenue, Lawrenceville, NJ 08648
Wednesday
6
July