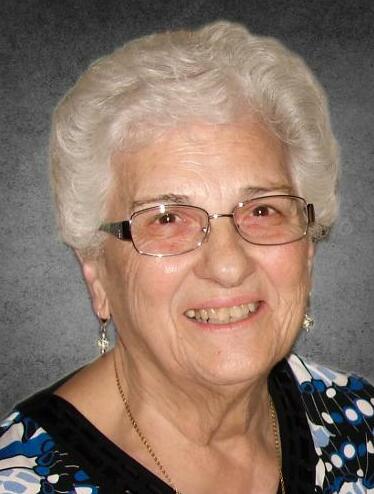 Please share a memory of Grace to include in a keepsake book for family and friends.
View Tribute Book
Grace DiMemmo Lanzoni, 90, of Lawrenceville died peacefully on Thursday June 23, 2022 at Morris Hall Meadows in Lawrenceville surrounded by her family. Born in Trenton, Grace was a resident of Lawrenceville since 1960. She served as an executive secretary with several companies, including Trenton Pottery, NJ Department of Health, Rider College and NJ Economic Development Authority before finally retiring. A devout Catholic and life-long member of St. James Catholic Church in Trenton, Grace was a member of its Altar Rosary Society, the Prayer Group and the Seniors Group. She also promoted the Central Association of the Miraculous Medal with a special devotion to St. Lucy, both responsibilities she assumed from her mother. She laundered and meticulously ironed the Church linens for several years. Grace was known for her open-back-door policy, welcoming everyone and anyone to her kitchen table where she lovingly served her famous homemade meals. Unexpected guests were treated with the same hospitality, and having already eaten was no excuse, nor were you permitted to leave empty-handed. Coffee was always on and you’d be treated to pastries, cookies, and donuts (Italian Peoples' long cream donuts were among her favorites). Daughter of the late Gaetano and Lucy Nucera DiMemmo and sister of the late Caroline DiMemmo Lanzoni, Guy DiMemmo and Vincent DiMemmo she is survived by her loving husband of 67 years, Harold Lanzoni; her children Thomas Lanzoni (Sandy), Loretta Lanzoni Schreffler (Owen), and Harold Lanzoni (Michele); her grandchildren, Jordan, Tyler and Colin Lanzoni, Amelia Cox (Dylan) and Christina Lanzoni (Quinn); her great-grandchildren, Aria Grace Cox and Elliot Cox; and her special nephews and nieces: Michael Lanzoni, Barbara and Frank Coyle; Dana Coyle Orr (Calder), Aster Orr, Silas Orr; Danielle Coyle Boccella (Dominic) and Cordelia Boccella. Her funeral will begin Wednesday July 6, 2022 at 10 a.m. at Poulson & Van Hise Funeral Directors, 650 Lawrence Road, Lawrenceville, NJ 08648. A Mass of Christian Burial will be celebrated at 11 a.m. at St. James R.C. Church, 29 East Paul Avenue, Trenton, NJ. 08638. Entombment will follow in St. Mary’s Cemetery Mausoleum, Hamilton. Visitation for family and friends will be held on Tuesday July 5, 2022, from 6 to 8 p.m. at the funeral home. Memorial contributions (in lieu of flowers) to honor Grace may be made to Incarnation-St. James Parish, 1545 Pennington Road, Ewing, NJ 08618 or to the Trinitarians, PO Box 1828, Sykesville, MD 21784 or to the charity of your choice.
Tuesday
5
July

Share Your Memory of
Grace
Upload Your Memory View All Memories
Be the first to upload a memory!
Share A Memory
Send Flowers
Plant a Tree