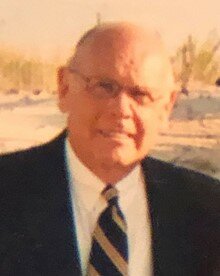 Please share a memory of Arthur to include in a keepsake book for family and friends.
View Tribute Book
Arthur G. Mattei of Lawrenceville, NJ and Avalon, NJ passed away on Wednesday, December 15th. Born to the late Bruno G. Mattei and Julia McKeon Mattei in Brooklyn, NY, March 29, 1940, he grew up in Brooklyn and later Staten Island, NY, and resided in various New Jersey locations prior to settling in Lawrenceville in 1972. Arthur attended Regis High School in New York City and received a bachelor’s degree from St. Peter’s College in New Jersey. He subsequently earned an MBA degree from Seton Hall University and engaged in a doctoral program in criminal justice at Rutgers University. He was also a graduate fellow of the National Institute for Court Management. Upon graduation from St. Peter's he was commissioned as a lieutenant in the US Army Reserve, The Adjutant General's Corps and served at Fort Harrison in Indiana. After his service, Arthur held a number of increasingly responsible positions in the private sector, followed by a career with the New Jersey court system. In that capacity, he was responsible for a large number of municipal courts, handled many public information projects, and received a number of acknowledgments and awards. In College, he was introduced to singing with the St. Peter’s Mens’ Glee Club and singing would become one of his greatest passions. In later years, he rekindled his love for music when a famous jazz clarinetist asked him to sing on stage in New York City. From there, he appeared in various cabaret shows and sang in piano bars in the Bucks County, PA area. He was a member of the Phillips Mill Players, Copper Penny Players, Bob Egan’s Players and various other performing groups. He was also a member of the NJ Jazz Society, United in Group Harmony Association and prided himself on the number of famous jazz and early rhythm and blues performers he met before they passed away. He and Jo Ann spent a lot of time in Manhattan where they had a timeshare for many years. They went to countless jazz clubs and Broadway shows before giving it up when they acquired the shore house in Avalon, NJ where they spent many happy summers. Arthur took pride in the fact that he was probably the only senior citizen, one would see, body surfing in the ocean! Perhaps his most defining characteristic was his sense of humor. His hearty laughter would often fill a room, frequently at his own jokes or laughing at himself, much to the delight and occasional annoyance of friends and family. He was most devoted to his Church. He was a member of St. Paul Church in Princeton, NJ and St. Brendan the Navigator in Avalon, NJ. He was a Third Degree and charter member of the Lawrence Council, No. 7000, Knights of Columbus, where he held a number of different offices over a period of some 45 years. He was also a Fourth Degree member of the Bishop Griffin Assembly, No.354, Knights of Columbus. He was very active in the respect life movement and for many years up until his passing he wrote and edited a widely circulated respect life newsletter. He often went to Adoration of the Blessed Sacrament where he found much peace just sitting with the living Christ. He was a member of the American Life League, NJ Right to Life, the Catholic League, Catholics United for the Faith, and the Association of the Miraculous Medal. Arthur is survived by his wife of nearly 60 years, Jo Ann (Rutnik) Mattei, daughter Jeanne Mattei-Ignas and husband Shawn Ignas of Cherry Hill, NJ, son John Arthur Mattei of Lawrenceville, NJ, daughter Jennifer Mattei Ehlers of Glen Mills, PA, and two grandchildren, Jamison and Lila Ehlers of Glen Mills, PA who were the light of his life. He is also survived by a sister Anne Marie Keating and her husband, Ted Keating of Staten Island, NY, cousins William Andersen and his wife Judith Andersen of Lakewood, NJ, Lynn Thompson of Monmouth Junction, NJ, and a large number of nieces, nephews, grand nieces and grand nephews. The viewing will be held Tuesday afternoon December 21, 2021 from 2-5PM at Poulson & Van Hise Funeral Directors, 650 Lawrence Road, Lawrenceville, NJ 08648. Mass of Christian Burial will be celebrated at 10:00AM on Wednesday, December 22, 2021 at St. Paul Church, 216 Nassau Street, Princeton, NJ 08542. The Mass will be concelebrated by priests who were longtime friends of Arthur. Burial will take place at the Cemetery of the Holy Cross in Brooklyn, NY. Due to the long distances many people will be traveling and the distant location of the cemetery, burial will be private with no procession. In lieu of flowers, memorial donations can be made to Leukemia and Lymphoma Society https://givenow.lls.org
Print
Tuesday
21
December