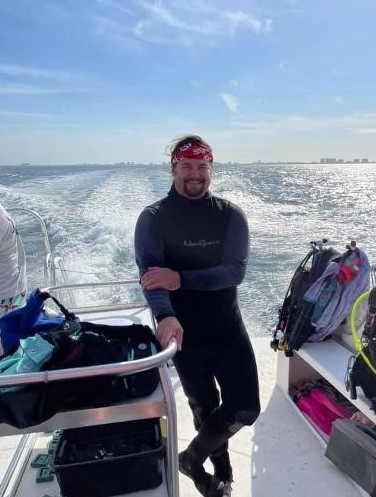 Please share a memory of Steven to include in a keepsake book for family and friends.
View Tribute Book
It is with great sorrow and heaviness in our hearts that we inform of the passing of our beloved Steven Michael Dvorak, 30, having passed peacefully in his sleep at his New York residence. Previously residing in Bordentown and Pennington, New Jersey, he was a resident of Vermontville, New York for the last five years. Steven was a graduate of Hopewell Valley Central High School and Mercer County Vo-Tech Automotive School and attended Mercer County Community College. As an athlete during his school years, he participated in ice hockey, football, and wrestling, and was a pole vaulter for the track and field team. While in high school, Steven worked for Blockbuster Video in Pennington. Following his high school graduation, he worked as an apprentice auto mechanic for J & S Auto Haus. During college and beyond, Steven was employed by Slocum’s Bowl-O-Drome where he managed the front desk, coordinating birthday parties and events, and assisted kitchen staff. Steven further pursued his passion in boating and scuba diving and longed for a career as an industrial scuba diver when his eyes caught a help-wanted ad for a scuba diver in Lake George, New York. He couldn’t be happier. He then began the career for which he was most passionate and co-founded Invasive Solutions Dive Company with his friend and business partner, Dan Cashin, where they harvested invasive plants from lakes across Lake George to Lake Placid, New York. The business grew steadily with the start of this year’s season already becoming the most successful. He, his partner, and team divers were thrilled and proud of their accomplishments. To further extend his diving skills, Steven most recently earned his Master Diver’s Certificate from Letts Dive in St. Petersburg, Florida. While earning his Certification, Steven became a highly respected diver who marveled his instructors with his talents. A dive site monument has been named in memorium to Steven in the Hudson Grotto in Hudson, Florida. Having earned his Master Diver’s Certificate and becoming a diving instructor, he anticipated training and recruiting future divers for his growing business. Being the ever adventurous soul that he was, Steven was always seeking a bigger and better thrill. If not skydiving from above, he was diving into the depths of the ocean. His other hobbies included skiing, snowboarding, hiking trails and cooking. He loved to host dinner parties and found great joy in preparing meals for all to enjoy. His smile and laugh was infectious, finding great joy in humoring all those around him and being known for his hilarious pranks! Steven was a loving, caring and thoughtful guy. He was always willing and able to help out anyone in need at any time and was happy to lend a helping hand. As a testament to his caring and helpful nature, he was a blood and platelet donor, and an organ donor. Predeceased by his paternal grandparents,, Frank A. and Claire Dvorak; his uncle Richard Dvorak, Steven is survived by his parents, Frank J. and Anne Marie Dvorak of Pennington, New Jersey, brother Frank J. Dvorak, Jr., and his wife, Kama, of Long Island, New York; his grandparents, Mary C. Cox of Ewing, New Jersey, and Dennis W. Cox and his wife, Lisa of Gainseville, Florida; aunts and uncles, Patricia and Edward Pozsony of Ocala, Florida; Karen Kramer and Anthony Bomentre of Feasterville, PA; Cynthia and James Norato of St. Petersburg, Florida; Dennis and Virginia Cox of Hamilton, New Jersey; Mary Jane Chiacchio of Fairless Hills, PA; and Frank Chiacchio of Ewing, New Jersey; his nephews Frank James Dvorak and Nathan Owen Dvorak; close-knit cousins, Michael and Ed Poszony, his “NCK” cousins, Sam & Jer Kramer, Jessica, Melissa, and Jimmy Norato, including his dearest cousin and close friend, Jillian Chiacchio; and many, many special cousins and dear friends. A Mass of Christian Burial will be held on Tuesday, July 6, 2021 at 11:30AM at St. James Roman Catholic Church 115 E Delaware Ave, Pennington, NJ 08534. Interment will be held privately and at the convenience of the family. Relatives and friends can pay their respects to Steven on Tuesday morning from 10:30-11:30AM at the church. In lieu of flowers, donations can be made in memory of Steven to Adirondack Wildlife Refuge, 977 Springfield Road, Wilmington, NY 12997, adirondackwildlife.org; or a charity of your choice. Steven would also be proud of anyone who would consider being a blood or platelet donor or organ donor.
Print
Tuesday
6
July