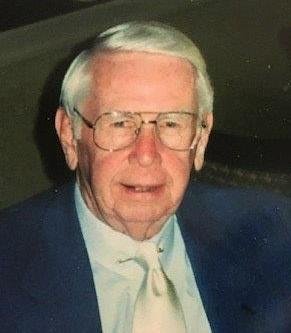 Please share a memory of Joseph to include in a keepsake book for family and friends.
View Tribute Book
Joseph Randall Kiernan, age 95, was a distinguished man of many talents and interests; throughout his life he resided in Philadelphia, Edgewater Park & Titusville, NJ and Holland, PA. He passed away peacefully on June 2, 2021. A native Philadelphian, Joe was a dedicated and passionate Philadelphia sports fan, having attended the first Philadelphia Eagles home game in 1933. He cherished summers in Ocean City, NJ, and scotch-on-the-rocks. He was truly one-of-a-kind, and the epitome of America’s greatest generation. Joe showed this in his commitment to his family, country, profession, and faith. For 64 years he was married to the love of his life Elizabeth Huhn Kiernan, who passed away in 2014. Joe is survived by four children, Mark (Barbara), Jane Hartsough (Michael, deceased) Annette Lawlor (Richard), Mary Boyle (Eric). He was predeceased by his son Randy (Colleen). Joe was blessed with nine grandchildren: Matthew, Kyle, Grant, Luke, Pierce, Moira, Katharine, Caroline, and Owen, and two great grandchildren, Nate and Ryan, plus two more on the way. Born on September 22, 1925, he lived in the Logan section of Philadelphia, attended Holy Child school, and graduated from Roman Catholic High School in 1943. He remained active with the school and the alumni activities for the remainder of his life. He was also a devoted son to his widowed mother, Genevieve Conway Kiernan (Randall) and his brother, Gerry, who lived his life with Cerebral Palsy. During World War II, he served in the U. S. Army Air Force stationed in Italy, serving in the 741st Squadron, 455th Bomb Group as a B-24 Ball Turret gunner, completing thirty-five missions over Europe in 1944. Following his service, he earned a bachelor’s degree from Saint Joseph’s University in 1949 and a master’s degree in Sociology from Temple University in 1952. After graduating from Saint Joe’s, his early professional life consisted of positions as a social worker for the Pennsylvania Department of Public Assistance and a business reporter for Dun and Bradstreet, Inc. Five years later he began his lifelong career in management with RCA Corporation, eventually moving to NBC offices at 30 Rockefeller Center, and continued in this capacity with General Electric once GE acquired RCA in 1985. Along with his work at RCA, he was an adjunct professor in Sociology at Saint Joseph’s University’s Evening Division for twenty-nine years. After retiring from GE in 1988, he co-founded the consulting firm Princeton Administrative Systems. Joe had a passion for learning. He was an avid computer user and master communicator until his passing. The author of five books including his memoir, he wrote Wartime Cinderella and Billy Markward and Friends, two books about Roman Catholic High School legendary basketball coach Billy Markward. These books were instrumental in getting Coach Markward inducted into the Philadelphia Sports Hall of Fame in 2015 and he is now under consideration for the Basketball Hall of Fame by the Naismith Basketball Organization. Joe was a devout Catholic and in his later years was a daily communicant. He firmly believed in the equality of all people and instilled this in his children. Throughout his life he was an active member of his parishes, acting as a lector, RCIA mentor, and an advocate and major fundraiser for the Bishop Caesar Asili Hospital in Luweero, Uganda. All who were blessed to know Joe are invited to attend his Life Celebration at St. Bede the Venerable in Holland, PA on Saturday, July 10th beginning with a Mass of Christian burial at 10 AM, followed by Military Honors rendered outside the church. A luncheon celebrating Joe’s life will follow immediately after. A private burial will take place at a future date. The family would like to thank Premier Companion Care Services and Joe’s dedicated aides, as well as the Chandler Hall Hospice team for their loving and expert care. In lieu of flowers, Joe has requested that contributions be made in his memory to Roman Catholic High School (www.RomanCatholicHS.com/RomanFund) or to Saint Joseph’s University (giving.SJU.edu/KiernanScholarship) Arrangements under the direction of the Poulson & Van Hise Funeral Directors, 650 Lawrenceville Road, Lawrenceville, NJ 08648. Please visit www.poulsonvanhise.com to send a condolence or for additional information.
Saturday
10
July