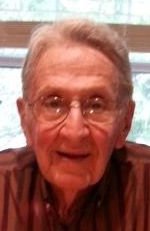 Already missed, Thomas Leo Blake of Ewing passed away on February 22, 2019 at Capital Health Center, Hopewell, surrounded by his devoted family.  Until recently, Mr. Blake enjoyed a lifetime of good health and died at age 98.

Son of Thomas Leo Blake and Julia A. Blake, Tom was born in East Trenton and attended Trenton Central High School and Rider College (on soccer scholarship) where he received a degree in Business. He was a U.S. Army veteran, honorably serving with the engineering division and spending much of his enlistment in England during WWII.  Upon his discharge, he completed his college degree under the G.I. Bill and returned to the family hardware business in Trenton. With his wife, Tom took over as owner of Blake Hardware on North Clinton Avenue and later initiated its relocation to North Olden Avenue.  Mr. Blake operated his hardware supply business for over 70 years before retiring in 2013. He remained a faithful and enthusiastic supporter of the people and small businesses established in the city and was often recognized by the community.

Mr. Blake was married for over 35 years to his beloved wife, Harriet (Hedwig), who passed away in 1990. He was a life-long resident of Ewing and raised his family there. A parishioner at Incarnation Church, he donated much of his time to serving others; he particularly enjoyed coaching CYO baseball teams and sponsoring various youth athletic leagues.  Most notably, he was president and treasurer of The Serra Club of Trenton, an organization devoted to fostering religious vocations. He was on the Board of the East Trenton Center for many years and contributed time and resources to Martin House, Habitat for Humanity, TPADS, the Hibernians, and Ewing Senior Citizens.

Tom's greatest joy in life was Blake Hardware, where he was affectionately called "Mr. Blake" by all.  There he found his true purpose--helping others.  Whether customers needed a new key or a good laugh, he provided both.  He was especially generous to those who sought his help to establish their own contracting or building businesses, and he willingly provided supplies to them when other resources failed.  His generosity of spirit allowed him to give to those in need, often free of charge.  Even after retirement, he was readily recognized by former customers, eager to shake hands with "Mr. Blake" once again. His cheerful, kind spirit and firm belief that "hard work and persistency are the stepping stones to success" are the contributing factors to his long and well-lived life.

Tom loved his wife, his children, his daughters-in-law, his grandchildren, tennis, Eagles football, Flyers hockey, a lucky day at the casino, Tuckerton, dogs, reading, and dancing a spirited foxtrot. He will be missed daily by his children and their spouses: Thomas L. and Kellee Blake; Bob and Susan Blake, NJ; Kathleen A. Blake, PA; David B. and Jill Blake; and by the Blake grandchildren: Alexandra, Matthew, Julia, Patrick, Andrew, and Jeffrey.

The viewing for Thomas will be held on Sunday afternoon from 5-8PM and again on Monday from 8-9AM at the funeral home.

Share Your Memory of
Thomas
Upload Your Memory View All Memories
Be the first to upload a memory!
Share A Memory
Send Flowers