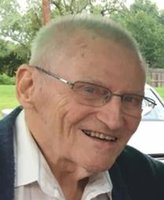 John M. “Jack” Smith, 92, formerly of Lawrenceville died peacefully on Thursday March 12, 2020 with his daughter by his side. Born in Trenton, Jack was a Lawrenceville resident most of his life. He attended Rider College and was employed as an accountant with Bayer Aspirin for 36 years and with the State of New Jersey, Department of Motor Vehicles as an auditor for 6 years before finally retiring in 1992. Jack was a Navy veteran of WWII, was a member of North Trenton American Legion Post #458 and a former member of the Lawrenceville Elks Lodge B.P.O.E. #2412. An avid Boston Red Sox fan, Jack also enjoyed golfing, hunting and playing blackjack in Atlantic City. Son of the late Frederick and Mary Morrison Smith, husband of the late Margaret Duncan Smith, and brother of the late Norman and Charles Smith; he is survived by his daughter Kathleen Warchol and her husband Peter, his beloved granddaughter Dana Pallotta; his sisters-in-law Joan and Anna Smith and many nieces and nephews. A Mass of Christian Burial will be celebrated on Tuesday March 17, 2020 at 12 Noon at the Church of Saint Ann, 1253 Lawrence Road, Lawrenceville. Burial will follow in the Ewing Cemetery. Visitation for relatives and friends will be held on Tuesday prior to mass from 10 AM until 11:30 AM at Poulson & Van Hise Funeral Directors, 650 Lawrence Road, Lawrenceville, NJ 08648. Memorial contributions to honor Jack may be made to either the Wounded Warrior Project at www.woundedwarriorproject.org or to the Greenwood House Hospice, 25 Scotch Road, Ewing, NJ 08625