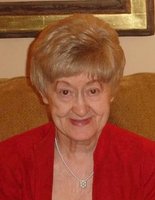 Helen “Patti” Sanders, also known as Helcia, 90, of Galloway, NJ died peacefully at home on Thursday with her loving husband by her side. Born and raised in Lawrenceville, Helen along with her husband resided in Tennessee, Alabama, Illinois, California and Florida prior to retiring to Galloway. Helen worked at the family business Park Lane Furniture in Ewing and was a bank secretary and teller in Trenton and Birmingham. She was a member of the Newcomers Club in Birmingham, Arlington Heights and Villa Park and also was a member of the Socialites Club in Villa Park. Helen was an animal lover and volunteered in several animal shelters and clinics. She rescued and had as pets many beloved cats and also loved her Boxer dogs. She was an avid polka dancer, followed Jimmy Sturr’s Orchestra, loved Elvis and got to meet him at one of his concerts. Daughter of the late Andrew and Stella Kozlowski and mother of the late Jerry Sanders she is survived by her loving husband James R. Sanders; her daughter-in-law Tracy Sanders, nephews Tom and Ron Kozlowski, nieces Maryann Cermele, Carol Bajor, Marge Schindewolf, Kathy Mierzewski and sisters-in-law Virginia and Veronica Kozlowski. Preceding Helen in death are a sister and brother-in-law, Alice and Frank Trainor, brother and sister-in-law John and Helen Kozlowski and two brothers Joseph and William Kozlowski. Visitation for relatives and friends in the Galloway area will be held on Thursday, January 16 from 2 to 3 PM at the Wimberg Funeral Home, 211 East Great Road, Galloway, NJ. Additional visitation will be held on Friday from 10 to 11 AM in the daily chapel at the Church of St. Ann, 1253 Lawrence Road, Lawrenceville, NJ. A Mass of Christian Burial will be celebrated at 11 AM in the church. Burial will follow in St. Hedwig Cemetery, Ewing, NJ. Memorial contributions to honor Patti may be made to the Humane Society to end cruelty and neglect for animals across the globe at www.humanesociety.org.